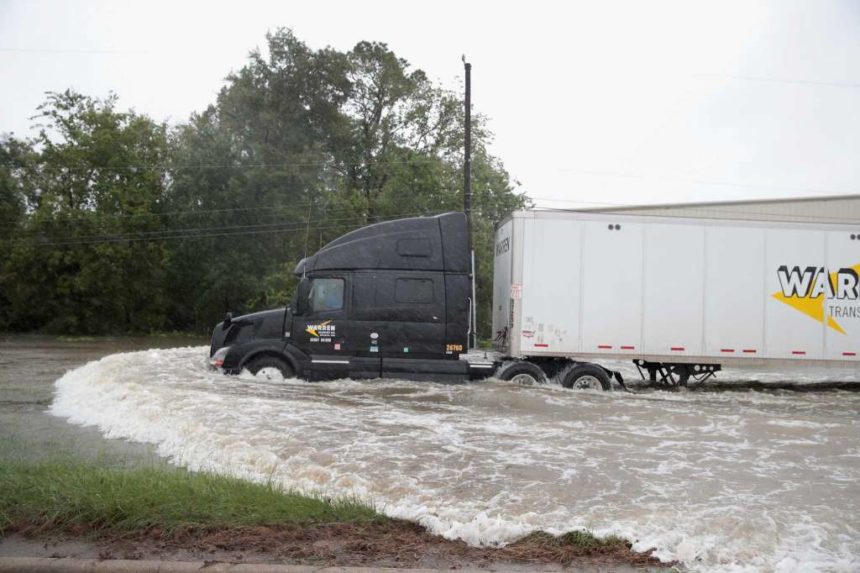 The floods caused by Hurricane Harvey are only going to worsen in the coming days, but insurance experts say that estimates based on the damage Harvey has already caused suggest that the financial cost of the devastating hurricane could be as high as $100 billion.

Nine people have died, thousands of homes and buildings have been flooded, and about 45,000 have been forced to seek emergency shelter.

Estimates of the final cost of the hurricane’s damage vary. Some insurance analysts estimate the damage to be in the range of $30 to $50 billion, but they note that not all of this damage will be covered by insurance. David Havens, an analyst at Imperial Capital in New York, told Bloomberg News the final bill could be as high as $100 billion.

The 2005 Hurricane Katrina-caused damaged reached $120 billion, of which $80 billion were insured losses. The 2012 Megastorm Sandy caused $75 billion in economic losses.

The Guardian reports that homeowners’ personal insurance policies typically exclude flood cover, so most of the flood-related claims in Texas will be borne by the U.S. National Flood Insurance Program (NFIP).

The New York Times reports, however, that many people in eastern Texas have not bought coverage from NFIP or have let their policies lapse. Moreover, the Times notes that many in east Texas never had to buy flood insurance because their property was not listed as being on a 100-year floodplain.

Charles Watson of data analytics firm Enki estimates the damage to homes alone could total $30bn. London-based Panmure Gordon analyst Barrie Cornes told the Guardian that the wind damage and flooding was likely to cause total economic losses of $30 to $50 billion.

Edward Morris and Michael Huttner, insurance analysts at JPMorgan Cazenove, referring to the amount of damage being covered by insurance, told the newspaper: “At this stage, it remains early to provide reliable loss estimates, but something in the $10 billion to $20 billion range appears likely, and could easily be exceeded given the extent of flood damage.”

Lloyd’s of London firms Lancashire, Beazley, and Hiscox are expected to be the worst-affected UK insurers. Cornes estimates they face bills of at least £100 million each.

Goldman Sachs analysts note that Harvey has inflicted a heavy cost on the Texas oil industry, which processes a third of the U.S. oil. Companies have shut down their facilities ahead of Harvey landfall, and it may be weeks before refineries return to full operation.

“The slow-moving nature of the storm will likely lead to these shutdowns continuing in coming days and may generate persistent damage as well,” Damien Courvalin, the head of energy research at Goldman Sachs, said in a note on Monday morning.

A Lloyd’s spokesman added: “In terms of Lloyd’s exposure, which in Texas includes the construction, energy, marine and hospitality industries, we’ll likely play a key role in the restoration of damaged businesses and communities. In the last five years, the Lloyd’s market has paid out $6.3 billion in catastrophe claims payments in North America, so this is an area where we have deep experience.”

Peel Hunt analyst Andreas van Embden said the U.S. flood program bears all homeowners’ losses up to $4 billion and only transfers 25 percent of the next $4 billion to the private reinsurance market. Thus, if Harvey causes an $8 billion flood loss, reinsurers would face a $1 billion claim. He estimates insured losses of up to $12 billion.

“Whilst Harvey is a major event we do not see this as being the size of a Katrina or Sandy,” he said.

How Scientists Can Help Make the Sustainable Development Goals a Reality

A Worsening Water Crisis in North Africa and the Middle East